Ok lots more work behind the scenes with a bit more for you to actually see this time. So… NPC/Quest Characters can now have quests/tasks attached to them.

Quests contain some text for the name, what the quest giver will say to you to entice you to do the quest, an initial reward (for example something you’ll need to actually complete the quest) and any number of final rewards. Also, of course, it contains what you actually need to do.

When you select an NPC who has a quest for you he will talk to you about it and a summary of what you’ll need to do and what your reward will be with pop up too.

You can accept or decline this and then, if accepted, then “Quest Accepted” will dramatically appear and the quest object is attached to your player object. 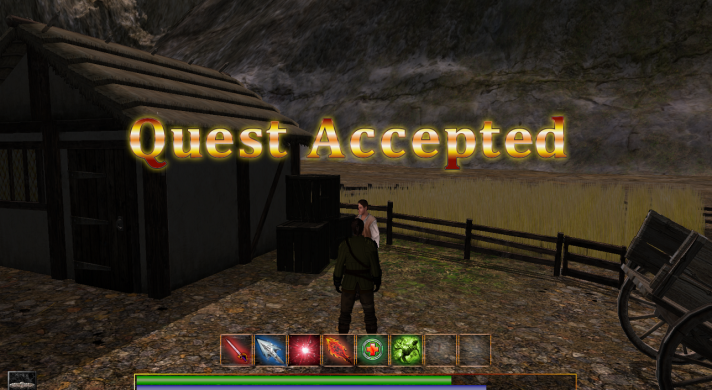 Before this of course I needed to actually make a version of my villager that wasn’t a merchant (I only had a merchant). He stands by his farm and fidget a bit (weird how hard it is to make a fidget animation not look ridiculous). He’s also set as a different type of NPC so now I have enemies, merchants and quest/task npcs. And as I mentioned above npcs can have quests attached to them.

I also had to find a nice shiny font which I semi copied from Final Fantasy 14 (not literally – just based on before i get sued). There’s is far nicer than mine but I’m happy enough with the result.

Next up I need to make the initial quest reward appear (I’ve made a dialog for this already) and then when you accept it, it will appear in you bag and you should be able to use it (a dagger in this case).. So yeah a lot to do before you can complete a whole quest cycle (get – do- get reward) but that’s what I’m aiming for.

I keep seeing mist rising from trees in films and TV shows. I’d really like to add that effect to my game but I have to resist adding effect after I found myself spending 2 months getting ground fog looking just right.

Anyway, until next time…