I took a sidetrack from the game user interface a little to add some more bushy tress to mix in with my pine. I have a lot of tree and bush models to work with but I had to fiddle around with both my tree shader and the texturing to get enough detail on the bark and leaves. This might cause a few frame rate and/or memory issues down the line but i’ll worry about that later. I can always use a low level of detail (LoD this is commonly abbreviated to) for when the trees are further away anyway.

Here’s an image of a close up Oak with the camera almost next to is pointing straight up. Now i’m not 100% happy with it but I was more intrested in it not looking blurry like some early 2000s game close up and it looks pretty nice. The texture has got a little fudged at the roots but hey: Fix it later. 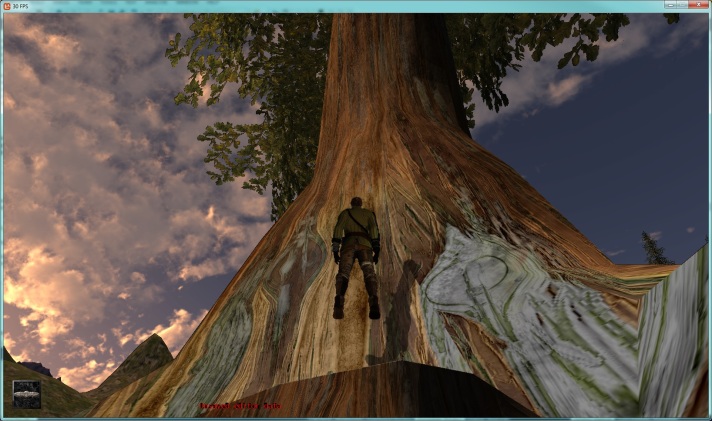 Back to the user interface. I didn’t like the character screen at all. Not even enough to work on for now so I remade that as below: 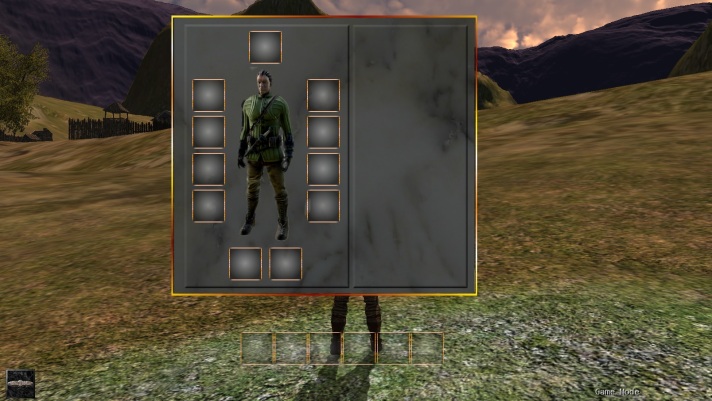 Which looks a lot better I think. It renders the player surrounded by icon slots for any equipment he’s wearing. Weapons, armor, accessories etc.

Also you’ll notice there’s a hotbar now with space for 6 icons. I want to keep it to 6 for now to avoid going down the route Everquest 2 does where you end up with 8 hotbars with 12 icons full of stuff, most of which does variations of the exact same thing. Also that won’t really work if playing with a controller which I want it to a possible to do.

I’m currently playing the remake of Final Fantasy 12 on the PS4 which is a pretty damn good (and underrated) RPG which obviously uses a controller just fine.

Other than that I made some other changes to make my life easier, refactoring etc but I won’t bore you with the details of that.

Next up: Health/Power bars, 3 Abilities (Close Attack, Ranged Attack, Self Heal for now), Making my peasants animated into a sensible resting pose and, knowing me, I’ll spend some more time fiddling with getting another nice bush or tree in the game.