Well the wonderfully named “Village1” is coming along nicely. It has 2 types of building (a barn and some kind of house) and a couple of props (a wood pile and a firepit).

I’ve done endless fiddling with effects as usual. Toned down the fog a little and re-added my particle ground fog from the old terrain engine which looks pretty nice I think. Voila:

Also after playing some more No Man’s Sky I decided billboard grass still has a place in modern games. Especially from distance. Sure it doesn’t look great from above but it a cheap (framerate wise) way of adding more fluffiness to the game. I didn’t bother actually finding a nice texture for it but I kinda flung support for it in. It waves in whatever direction you want and whatever speed and it can be semi-transparent. It doesn’t cast shadows like the instanced version can but who cares to be honest. Here’s a bad example of how it would work (it would be far more bunched than this in game). It’s mixed in with the instance grass. 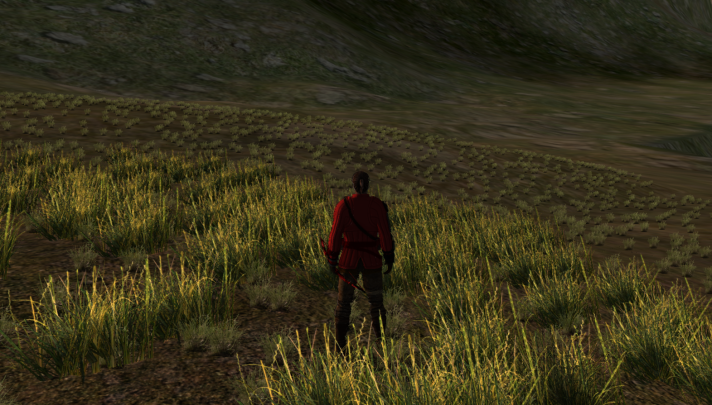 It’s a bit too patchy as I said but you get the idea.

Back to the village. I just need to rip through a load of placeholder bought models while my model guy does his thing and get them in game. I haven’t even added the normal maps for them yet but they still look pretty reasonable for cheap models.

Hopefully but the end of the weekend I’ll have the village surrounded by it’s wall and another building and some more props to make it less empty.

I’ll have to do some serious actual game design soon since the actual “what do I” parts are a bit sketchy other than a bizarrely in-depth plan of how the gathering/mining etc is going to work.